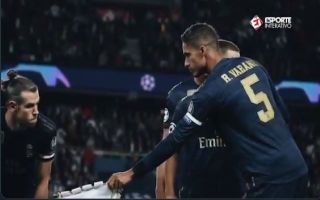 It must be pretty satisfying to see a manager try and force you out the club, only for them to turn round and play you in the majority of games.

Zinedine Zidane openly admitted he wanted to see Bale move on, yet no move actually happened so the Welsh superstar is still at the club.

Bale hasn’t looked that happy recently, this video surfaced during their pre match photo against PSG and it doesn’t look great for the Welshman. The way he looks at and handles the Real Madrid emblem looks a bit like a teammate has actually handed him a freshly soiled nappy instead:

This is not such a great look for Gareth Bale https://t.co/QjZT71G2kh

Bale turned 30 this Summer, so you hope if he really is unhappy in Madrid he will get the chance for one last move to enjoy his best remaining years.