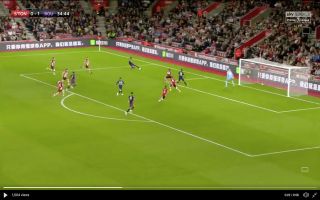 Liverpool ace Harry Wilson pulled off a tidy finish to round off a lovely team move by loan club Bournemouth against Southampton this evening.

In the 34th minute of tonight’s Premier League encounter between south coast rivals Southampton and Bournemouth, the Cherries built the ball forward with some lovely team play.

Joshua King played in summer signing Philip Billing who picked out Harry Wilson with a lovely low cross. The 22-year-old made a smart run to leave himself open before slotting the ball into the back of the net.

Check out the winger’s goal below:

If he can continue his good form, Jurgen Klopp’s side could make a hefty profit on the youngster or promote him to the first-team as a backup for Mohamed Salah and Sadio Mane.