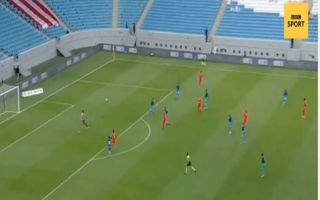 There are two pretty incredible things about this clip, we’ll come onto the goalkeeping in a minute.

Firstly it really doesn’t help your league’s reputation to broadcast games in a stadium that holds thousands of people when there’s only about 100 there.

READ MORE: Video: Miss of the season right here as striker misses OPEN GOAL from 6 yards out under no pressure

Now for this piece of goalkeeping. Surely for a league with so much money they could afford to employ someone to bellow “switched on from the start lads” from the sidelines. Or at least some sort of goalkeeping coach.

It’s not even clear what the keeper thinks is going to happen here, but it’s an absolute gift for the opposition: