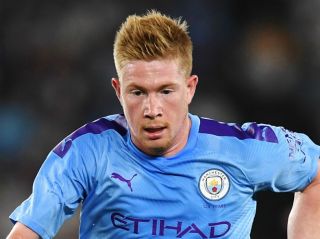 Mesut Ozil has established a reputation during his career for being an assist king, but Man City ace Kevin De Bruyne has the figures to back himself to have that title.

The Belgian international was in fine form on Saturday as he orchestrated his side’s 8-0 win over Watford at the Etihad.

As well as getting on the scoresheet himself, De Bruyne produced a world-class assist for David Silva in the first minute, and that in turn has helped him surpass Ozil in the assists ranks.

According to ESPN FC, as per their tweet below, the City midfielder (53) now has more Premier League assists than Ozil (52), and has reached that milestone in 41 fewer games.

That just goes to show the level of quality and consistency that he has displayed since joining the reigning Premier League champions, while he has suffered with injury setbacks along the way and still manages to come back and be hugely influential.

There is little doubt that Pep Guardiola will need him to be the driving force in the side this season to ensure that they continue to win major trophies, and based on his track record as displayed below, De Bruyne isn’t one to let his side down.

It was an important win for Man City this weekend, as after the defeat to Norwich City last time out coupled with injury blows to Aymeric Laporte and John Stones, question marks were raised over whether or not they would be able to come through a difficult period.

However, they produced an exceptional response as they blew Watford away, and it was no surprise to see De Bruyne play a pivotal role in their victory.