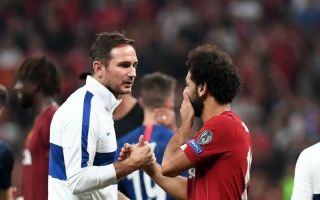 Chelsea manager Frank Lampard said that Mohamed Salah did not succeed at Stamford Bridge due to lack f first-team football.

The Egyptian international first came to the Premier League in January 2014 after the Blues signed him from Swiss club FC Basel.

However, Salah made only 19 appearances for Chelsea during his short spell, scoring twice and providing four assists. He had a couple of loan spells at Fiorentina and Roma before joining the latter on a permanent deal in 2016.

Lampard who played a few matches with Salah at Chelsea, said that he had the talent but lack of opportunities was why he did not have a good spell with the club. As quoted by Metro, the Blues manager said: “It is hard because everyone has their own pathways. Unfortunately for Mo, it didn’t work out here but it is great credit to him. He went to Italy and then came back and now he is a superstar.

“As for his path, it is hard to compare to what may have been. I had an overlap with him. The talent was obviously there. At the time, I think we had a lot of options in attacking areas. Number 10s, wingers and he didn’t get as many opportunities for whatever reason but yes you could see the talent was there. But the player that he is now or that came back to Liverpool I think you have to say huge credit is due. You don’t have to search for anything more than look at Mo himself. You have to say what professionalism and work ethic to leave a club like Chelsea is not easy.

“People then cast you aside and say you won’t make it there. He went onto be the superstar he is now. It is completely credit to Mo himself.”

Given the kind of player he is now, it’s fair to say that Salah joined Chelsea at the wrong time. The Blues already had a number of attacking options in Eden Hazard, Fernando Torres, Diego Costa, Demba Ba and Samuel Eto’o. Hence, it was highly unlikely for the Egyptian winger to get regular first-team football.

The loan spells at Fiorentina and later, Roma changed things for Salah as he joined the latter on a permanent deal and impressed for them which eventually led to him signing for Liverpool.

The 27-year-old has now become one of the best footballers in the world and there’s every chance of him winning a Ballon d’Or in some point of his career if he keeps going like this.