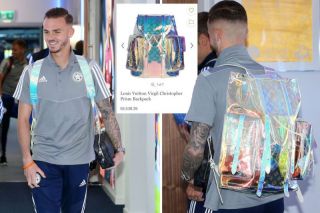 James Maddison received some stick ahead of Leicester City’s clash with Tottenham on Saturday, but he managed to have the last laugh.

Or so he thought. As seen below, the Foxes midfielder decided to go with a shocking fashion statement by wearing a Louis Vuitton backpack which was said to have cost him over £6,000.

He was trolled by The Sun before kick-off, but it seemed to bring him some luck on the pitch at least as he bagged the winner against Spurs with a stunning strike to secure a 2-1 victory for Leicester City.

James Maddison spent £6,500 on this daft LV bag. Last year the UK Gov spent an average of £6,200 per secondary school pupil. Some professional footballers do actually have more money than sense. pic.twitter.com/91ShJZHk5S

However, Chilwell wasn’t going to let it pass without having a swipe of his own at the Sun and perhaps his teammate too, as he tweeted after the game that he had just seen his Foxes teammate put his Man of the Match award in the backpack in question.

In turn, while many will probably agree that it’s an awful accessory and a very expensive one at that, Chilwell and Maddison will just be pleased that they got the right result on Saturday to continue their impressive start to the Premier League campaign.

I’ve just seen him stuffing the MOM trophy in it too ? https://t.co/rEN754PuqR