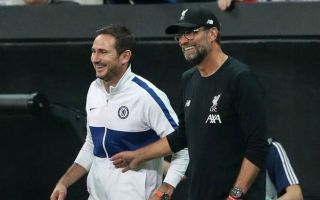 Manchester United legend Gary Neville wants Chelsea to beat Liverpool tomorrow so that this season can be a ‘dramatic’ one.

Liverpool have started this season very well, winning all of their Premier League matches so far. Chelsea’s start hasn’t quite been the kind they would’ve wanted. The Blues are currently 7th in the table with eight points.

Neville feels that the season will be more dramatic if Manchester City and Liverpool drop points and that’s why he wants Chelsea to win at Stamford Bridge tomorrow.

As quoted by the Mirror, the former Manchester United skipper told Sky Sports: “Sunday’s a big game. The last two years have been unique as title winning seasons. Man City have been incredible and Liverpool have been playing title-winning football for 18 months.

There is a chance of the title race being more than just Manchester City and Liverpool provided the two teams drop points. City have already registered their first defeat which came against Norwich City, of all teams.