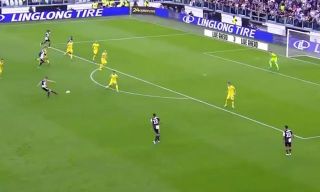 Juventus had to come from behind against Verona on Saturday and it was Aaron Ramsey who scored on his Serie A debut for the Bianconeri.

The hosts were given a scare as Verona missed from the penalty spot as they hit the woodwork twice in quick succession.

However, that still wasn’t enough to switch Juve on as they could only watch as the ball eventually broke to Miguel Veloso who scored with a sensational volley to break the deadlock.

That stunned the home crowd, but they didn’t have to wait long for a response from their side as Ramsey scored his first goal for Juventus just 11 minutes later.

The 28-year-old was helped by a deflection, but it was a great effort from distance to get himself off the mark for the Turin giants as he’ll hope that’s the moment to swing the game back in their favour.

It’s a big game for Maurizio Sarri’s side as they dropped points away at Fiorentina last weekend, while rivals Inter look as though they’re capable of mounting a serious bid to topple them this season after an impressive start to the campaign at least.

?? Aaron Ramsey gets his first goal since his move from Arsenal pic.twitter.com/Pr4O0qb54g

Aaron Ramsey has just introduced himself to the Juventus faithful! pic.twitter.com/3HNA7wy2rW

?? Miguel Veloso gives Verona the lead over Juventus with a wonder goal after an unbelievable sequence for the away team! pic.twitter.com/TdzXVEG7iA