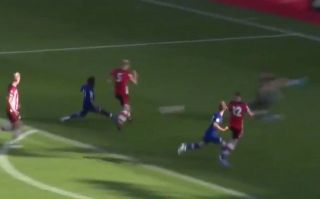 Chelsea boss Frank Lampard will have been delighted with what he saw on Saturday as Callum Hudson-Odoi scored in the U23 side’s win over Southampton.

The 18-year-old has been sidelined since the end of last season after suffering a serious injury setback, but he looks to be in the final stages of his comeback.

Given another chance to impress for the U23s this weekend, he didn’t disappoint as he bagged a well-taken goal, as seen in the video below. After racing onto a through-ball from his Chelsea teammate, Hudson-Odoi showed composure and a tidy finish to find the back of the net.

In turn, that will be a major boost for his confidence on the comeback trail and also a message to Lampard that he is ready to play his part this season.

As noted by the club’s official site, the talented youngster recently signed a new long-term deal to commit his future to Chelsea, and so the pieces are seemingly falling into place for him to play a key role under Lampard moving forward.

The Blues boss has shown that he’s ready to give the young players in the squad a chance this season, and the likes of Mason Mount, Tammy Abraham and Fikayo Tomori have responded brilliantly.

He could now be set to add another player to that core of youth products, with Hudson-Odoi closing in on a comeback for the first team.

The winger gets in behind the defence to score past Lewis and break the deadlock. pic.twitter.com/y82hnEY24K