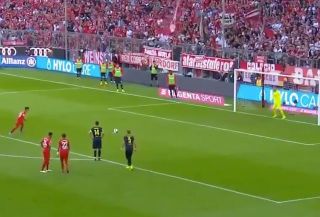 Philippe Coutinho bagged his first goal for Bayern Munich on Saturday in their comfortable 4-0 win over FC Koln at the Allianz Arena.

As noted by BBC Sport, the 27-year-old joined the Bavarian giants on an initial season-long loan deal from Barcelona this past summer, with an option to buy included in the agreement.

In turn, he’ll be hoping to impress this year in order to secure a permanent switch to the reigning Bundesliga champions after enduring a difficult time at the Nou Camp.

He’s had to wait to get his first goal for the club, but he did so with a confident finish against Koln on Saturday as he made no mistake from the penalty spot, as seen in the video below.

However, it came after a classy gesture from teammate Robert Lewandowski, as despite the prolific forward being on a hat-trick after bagging a first-half double, the Polish international stepped aside and gave Coutinho the chance to open his account for Bayern.

Fortunately for all concerned he did so, although Lewandowski didn’t go on to get his third of the game with Ivan Perisic wrapping things up for the hosts. Nevertheless, it’s a great touch from the Bayern forward as he explained his decision after the game, as seen in the tweet below.

Lewandowski, on a hat trick, lets Coutinho take the penalty and the Brazilian converts for his first @FCBayernUS goal! pic.twitter.com/dwRvP4ccN5

Robert Lewandowski: "It was a spontaneous decision to let him (Coutinho) take the penalty and score his first goal at home as it's important for his self-confidence. I want to help my teammates. Philippe is a great player" #FCBKOE pic.twitter.com/2nCvjg6Nz1