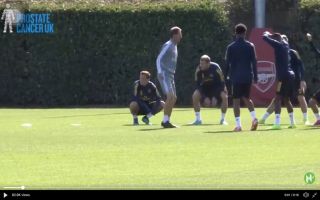 Some Arsenal fans are furious with superstar Mesut Ozil after a clip emerged of the 30-year-old lounging around during a team training session.

Some Arsenal fans have taken to social media to blast superstar Mesut Ozil, the club’s highest-earner, after a short clip of training was released which shows the ace looking uninterested while his teammates follow a first-team coach.

The former Real Madrid star then sprung into action once the cameraman approached the first-team stars in action.

Mirror Football report that the retired Germany international earns £300,000-a-week at the Emirates.

The 30-year-old playmaker has made just one appearance for the Gunners so far this season but it looks as though the attacking midfielder is becoming a bigger part of Unai Emery’s plans.

Take a look at the clip that has sparked criticism towards the World Cup winner:

Holy SHIT! Nah, guys look at Ozil in this clip. He’s just sat there while the rest of the team are training and when he does get up he isn’t exactly breaking a limb. Shocking ?#afc pic.twitter.com/GLmrvdOMAG

Here’s how Arsenal fans have reacted to Ozil’s display:

Exactly why he doesn’t play. Idle cunt. Yes he can pick a pass but that alone doesn’t mean he should play. Hes wank at everything else. Be last player in my team

Get this lazy bastard outta my club

C**t needs to leave the club.

gwt this fraud out of our club!

Hes pissed off not getting selected

Holy shit. I want him out my club please. Stealing our wages

The criticism from some fans is understandable, but a 16-second clip hardly tells the full story of how Ozil performs in training. If this was proven to be a constant issue, then fans would be right with their criticism.

With the first-team coach appearing to demonstrate something, Ozil could simply have been waiting for that demonstration to finish before getting on with his work.