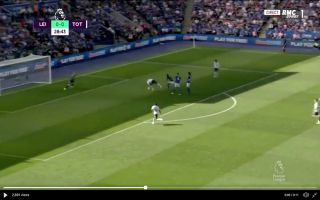 Harry Kane has just showed off his killer natural finishing ability by pulling off a wonderful instinctive finish to give Tottenham the lead against Leicester.

In the 28th minute of this afternoon’s Premier League clash between Leicester and Tottenham, Spurs star Harry Kane showed off his insane finishing ability by scoring a superb goal.

The superstar made a smart run into the box and received a shove in the back by Foxes defender Caglar Soyuncu, somehow the forward managed to turn the ball into the back of the net with his right-foot whilst he was tumbling to the floor.

Replays highlight just how focused and concentrated Kane was on the ball before his instinctive finish.

Check out the England captain’s opener below:

Top finish from Harry Kane to make it 1-0 vs Leicester pic.twitter.com/R3pEhdpnJN

This was Kane’s fourth league goal of the season, the 26-year-old will be hoping to beat the likes of Pierre-Emerick Aubameyang and Mohamed Salah to the Premier League’s Golden Boot this season.