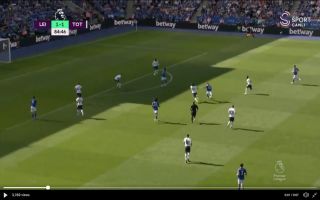 Leicester City star James Maddison has just scored a stunning late strike to seal a win for the Foxes against Tottenham, Brendan Rodgers’ side could finish in the top six.

In the 85th minute of this afternoon’s Premier League clash between Leicester and Tottenham, 22-year-old star James Maddison stunned Spurs by scoring a sensational long-range strike to seal the three points.

The Foxes pulled off a wonderful second-half comeback to win 2-1.

The ace picked up the ball outside the box from teammate Hamza Choudhury and launched a thunderous strike which flew into the back of the net.

Check out the playmaker’s brilliant strike below:

Maddison was recently called up to the senior England squad but Gareth Southgate is yet to give the talented attacking midfielder his Three Lions debut.