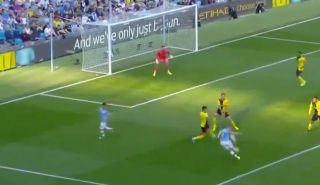 Man City enjoyed an 8-0 win over Watford on Saturday and Kevin De Bruyne was undoubtedly crucial in their impressive victory.

The Belgian star kicked things off with a brilliant assist for David Silva to open the scoring in the first minute, and his influence on the game certainly didn’t stop there.

He showed his class with a superb finish to get on the scoresheet too, as seen in the video below, as he lashed home an unstoppable drive to give Ben Foster no chance.

It was an afternoon to forget for Watford, but ultimately it was an excellent display from the reigning Premier League champions who would have wanted to put on a performance and produce a reaction after their defeat to Norwich City last weekend.

Now the pressure switches back to Liverpool to respond against Chelsea on Sunday, as despite their defensive flaws after injuries suffered by Aymeric Laporte and John Stones, Man City showed that they can be unstoppable going forward on their day to give teams plenty of headaches.