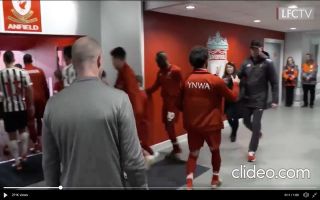 A video has surfaced of Mohamed Salah’s ‘adorable’ pre-match ritual with Liverpool manager Jurgen Klopp. It’s great to see that the pair have such a close relationship.

A clip shared on social media shows that Liverpool superstar Mohamed Salah shares a hug with Reds boss Jurgen Klopp before every match.

Isn’t it just great to see Salah working his way through a crowded tunnel to find his gaffer before he takes to the pitch.

The superstition is certainly working wonders for Salah and Klopp. The former Chelsea star’s return to the Premier League has led to Liverpool establishing themselves as a serious threat in world football once again.

Check out the pre-match routine below:

Those pre-match hugs have also inspired Salah to win two consecutive Premier League Golden Boot’s since his move to to the Reds.