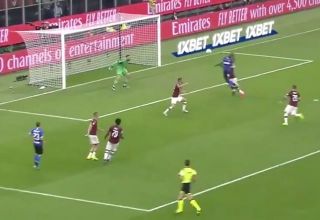 Romelu Lukaku got his first taste of the Derby della Madonnina on Saturday night, and he marked it with a goal to secure a 2-0 win for Inter over Milan.

Marcelo Brozovic opened the scoring early in the second half, albeit via a big deflection, as the Nerazzurri were the better of the two sides and deserved their lead.

That lead was doubled not long after as Lukaku met a great delivery from the left flank and headed past Gianluigi Donnarumma to grab his third goal in four Serie A games, as seen in the video below.

That’s now four straight wins to start the season for Antonio Conte’s side, and he’ll be delighted that his frontman has started so positively to lead their charge.

As for Milan, it was a bitterly disappointing night for them and coach Marco Giampaolo, with Inter goalkeeper Samir Handanovic not having to make a save of note throughout the contest.

?? Lukaku doubles Inter's lead over Milan with a great header into the corner! pic.twitter.com/xmEcc3d8nJ

It's looking as if Milan will be black and blue tonight! ???