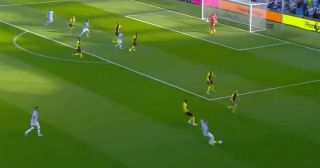 Man City wasted no time in finding a breakthrough against Watford on Saturday as David Silva found the back of the net in the first minute.

After defeat at Norwich City last time out in the Premier League, Pep Guardiola will have been looking for a response from his players.

In turn, he certainly got that after taking such an early lead and Sergio Aguero doubled their advantage just minutes later from the penalty spot, while Riyad Mahrez made it 3-0 after just 12 minutes.

However, there were signs of concern for the reigning Premier League champions though as Watford did pose a threat themselves, but ultimately a clinical start to the encounter has put Man City in a dominant position as they look to secure all three points and close the gap on rivals Liverpool.

The Reds aren’t in action until Sunday as they take on Chelsea and they may well be looking to respond to a comprehensive win for their rivals.

That's all it took for Man City to take the lead vs. Watford! pic.twitter.com/O1jlq4BTCE

FIFTY-ONE SECONDS ON THE CLOCK! ?@ManCity with a ridiculous start to this one!#OptusSport #PL #MCIWAT pic.twitter.com/h5ZMpqBGPy