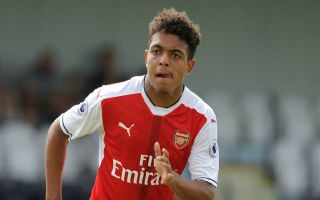 Arsenal are reportedly interested in signing PSV striker Donyell Malen who has been in fine form for the Dutch club this season so far.

The 20-year-old spent a few years in Arsenal’s youth team before being sold to PSV. So far, Malen has amassed 21 goals and nine assists in 59 appearances across all competitions. This season, he has been in stunning form so far, netting ten goals and providing four assists in 13 matches across all competitions. Last weekend, Malen shot five goals past Eredivisie leaders Vitesse, thus becoming only the third PSV player to score that many in a league match.

Malen has also made two appearances for the Netherlands national team during the recently concluded international break. He scored on his debut in the Oranje’s Euro qualifier against Germany in Hamburg.

According to the Mirror, Arsenal are interested in bringing back Malen who is rated at £50 million. This report also states that as many as 45 clubs have been tracking the 20-year-old whose current contract with the Boeren runs out in 2024.

The Dutch international’s recent form suggests that he is one to watch out for in the future. Several clubs are bound to be interested in signing Malen if he maintains consistency.

The 20-year-old will certainly be a fine addition to Arsenal’s squad but they already have a number of solid attackers in Pierre-Emerick Aubameyang, Alexandre Lacazette and Nicolas Pepe. Hence, Malen may not receive much first-team football in North London.

Major boost for Man United as top transfer target could leave for around £90m, replacement already eyed up

Video: Arsenal target Donyell Malen denied a goal for PSV with one of the worst offside calls ever