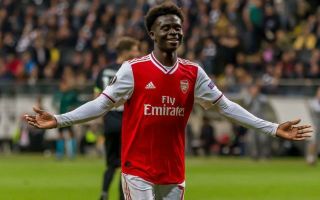 The exciting young attacker only turned 18 this month and scored his first goal for the Gunners in the midweek Europa League win over Eintracht Frankfurt.

Still, few would have expected Saka to necessarily keep his place in a Premier League game, but it seems Arsenal manager Unai Emery is continuing to show great faith in his youngsters, handing him his first start in the league.

The likes of Reiss Nelson, Joe Willock and Ainsley Maitland-Niles have also been given chances by Emery since he took over at the Emirates Stadium, but Saka arguably looks the biggest natural talent of the lot.

The England youth international will now be hoping he can continue to show he deserves his place in the senior side this afternoon as Villa travel to north London.

This will no doubt be a big test for him, but for now these Arsenal fans are very excited by this big selection call from Emery…

Absolutely buzzing to see Saka starting today, I wouldn’t have questioned it if he didn’t, but he has deserved this chance today. Hopefully he will take it when nelson has fauled to take his. #AFC #COYG #ARSAVL

Buzzing to see saka start, deserves it after thursdays performance!