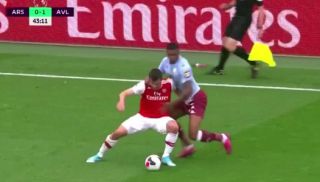 Some Arsenal fans are not at all happy with the antics of Sokratis Papastathopoulos in the video below.

Watch as the Greece international tries to make up for his bad defending by feigning injury and trying to get his opponent in trouble.

Embarrassing from Sokratis. Should be booked for simulation. #AVFC pic.twitter.com/ESXkVE2LcU

This clip just sums up how bad Arsenal have been of late, with their defensive performances in particular being so poor as individual errors have cost them in recent setbacks against Liverpool, Tottenham and Watford.

Sokratis will surely be embarrassed to watch this back again later…

Sokratis you're an absolute disgrace to this club. Getting bullied by Wesley. Get out. https://t.co/HQVNYjLT06

Arsenal predictably terrible, down to 10 men and Sokratis cheating trying to get people sent off. Embarrassing

Sokratis, you cheating wanker. You should be ashamed of yourself. #AFC

sokratis should be ashamed of himself for that fakery #ARSAVL