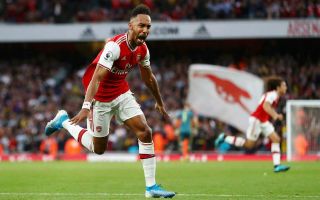 Arsenal manager Unai Emery has revealed that Pierre-Emerick Aubameyang made the decision to let Nicolas Pepe take a penalty in today’s win over Aston Villa.

The Ivory Coast international stepped up to score his first goal for Arsenal in the 3-2 victory, and that will be a big relief for the big-money summer signing from Lille.

Pepe has not made the most convincing of starts to life at the Emirates Stadium, so Arsenal fans will surely be thrilled to see this classy gesture from Aubameyang to hopefully boost the new-boy’s confidence.

The Gabon international ended up scoring the winning goal from a free-kick in the second half, continuing his superb start to the season.

Despite his excellent scoring record, Aubameyang is clearly not your typically selfish centre-forward, as he didn’t mind lending this one to Pepe for the good of the team.