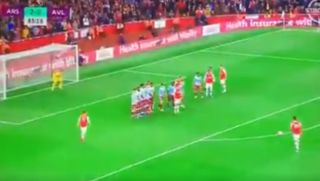 Arsenal have completed a quick turnaround against Aston Villa today thanks to a sublime goal from Pierre-Emerick Aubameyang.

Watch below as the Gabon international fires in a beauty of a free-kick to make it 3-2 to the Gunners, just moments after Calum Chambers had equalised for the home team.

Aubameyang has carried this Arsenal side of late, and his heroics have done it for them once again as they lead for the first time in this crazy match.

Villa can surely still hope for a comeback of their own given how unconvincing Arsenal have been for much of the game, but for now Aubameyang is the hero at the Emirates Stadium.