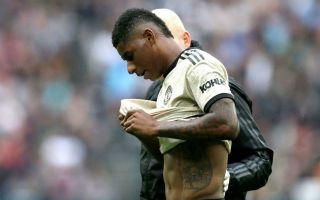 “I’m not a doctor!” This was Manchester United manager Ole Gunnar Solskjaer’s snappy response when Sky Sports asked him for an injury update on Marcus Rashford in the aftermath of Sunday’s humbling 2-0 defeat at West Ham.

Rashford and his teammates flopped at London Stadium but the England striker can be excused in some part as he was only able to complete 61 minutes due to an apparent muscle strain.

Although he only touched the ball 24 times during a miserable hour, United will be seriously sweating on the fitness of Rashford, who – following the sale of Romelu Lukaku – is the man tasked with scoring the bulk of their goals this season. He has hit three in six Premier League appearances so far.

Solskjaer seemed tetchy when quizzed about Rashford in Stratford. Speaking to Sky, he quipped: “I don’t know how bad it is, I’m not a doctor.

“He’ll have a scan tomorrow and I’ll get back to you when I know more.

“Hopefully we’ll get Mason and Anthony back soon, it’s just unfortunate that it happened today when we didn’t have the other two unavailable.”

The Manchester Evening News later quoted Solskjaer as adding: “He felt his groin. So he will probably be out for a little while.”

United were outplayed by West Ham, who registered six shots on target to their three.