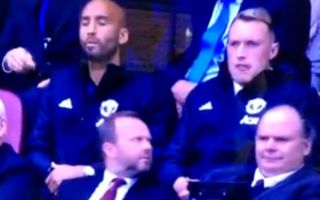 The Red Devils legend won his first eight games at the wheel… and who can forget that famous win against PSG in the Champions League?

But the honeymoon period is well and truly over. Sunday’s 2-0 defeat at West Ham extended United’s winless away run to nine Premier League matches.

Fans are fickle so it is natural that many will have already lost patience with the Norwegian. But has he also lost the faith of one of his players?

Phil Jones has been marginalised by Solskjaer this season following the big-money acquisition of Harry Maguire. Thursday’s start in the Europa League against Astana was the gurning defender’s only outing so far this term. So, it is plausible that Jones might be a bit fed up with OGS.

Jones was sat in the stands behind United CEO Ed Woodward during Sunday’s game and many fans have shared Sky Sports video footage which shows Jones appearing to mumble something very anti-Solskjaer.

West Ham fans taunted Solskjaer with chants of: “You’re getting sacked in the morning”. And the allegation made by multiple Twitter users is that Jones joined in before being scalded by Woodward.

“Getting sacked in the morning”

Phil Jones saying you’re getting sacked in the morning then getting told off #priceless ????pic.twitter.com/i5wu1cnD9r

Jones: Sacked in the morning.