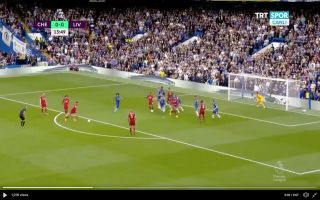 Liverpool have taken the lead against Chelsea after this stunning strike from Trent Alexander-Arnold after a well-worked free-kick routine from the Reds.

After winning a free-kick in a dangerous area, Liverpool superstar Mohamed Salah proved how much of a team player he is by using a lovely back-heel to roll the ball to teammate Trent Alexander-Arnold.

The England international blasted the ball into the top corner with a sensational first-time strike.

Check out the right-back’s superb opener below:

Alexander-Arnold is one of England’s most lethal set-piece specialists. This was the assist king’s first goal of the season.