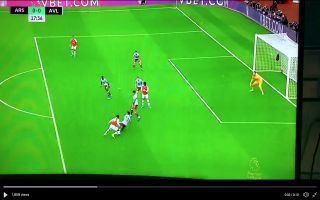 Arsenal forward Nicolas Pepe is quickly establishing himself as one of the best dribblers in the league, the ace dropped this Aston Villa defender with some superb skill.

In the early stages of Arsenal’s Premier League clash with Aston Villa earlier today, superstar Nicolas Pepe sold Villa left-back Neil Taylor’s down the river with a fine piece of skill before attempting a shot on goal.

According to BBC Sport, the north London club paid a club-record fee of £72m to bring the exciting forward to the Emirates.

Here’s the 24-year-old showing off his fancy footwork below:

Nicolas Pepe doing what he knows how to do best ??

Pepe evened the scores to 1-1 in the 59th minute by converting a penalty for Unai Emery’s side, check it out here.

Scoring his first goal for the Gunners would have lifted a massive chip off of his shoulders, the Ivorian will be hoping to build on today’s performance and start to prove his £72m price tag.

A clip of the 24-year-old dazzling the opposition’s defence seems to be emerging after every match, it’s clear to see that Pepe has some of the best dribbling and skills in the league.