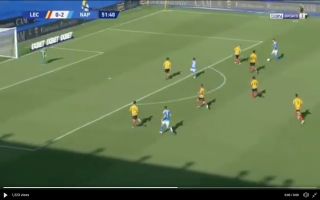 Barcelona and Real Madrid target Fabian Ruiz scored a sensational goal for Napoli earlier today, the Spaniard is quickly becoming one of the top young talents in the world.

In the 52nd minute of Napoli’s Serie A clash with Lecce, star man Fabian Ruiz showed that he doesn’t need any help to get the business done as he dazzled two defenders with some lovely footwork before curling the ball into the back of the net.

Ruiz is one of Napoli’s best players, the former Real Betis star has really taken his game to the next level under the tutelage of Carlo Ancelotti.

According to Calciomercato, Real Madrid, Barcelona, Bayern and Liverpool are all keen on Ruiz.

As per Don Balon, Barca, as well as Real Madrid, as eyeing up the Spaniard, whose value currently sits at around €60M, with the Blaugrana viewing him as a possible replacement for either Alena, Vidal or Rakitic.

Check out the Spaniard’s superb goal below:

It’s easy to see why he’s so highly-rated with goals like this.