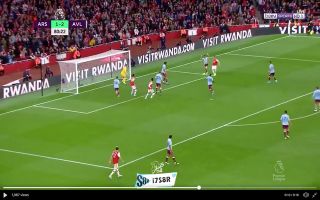 Arsenal defender Calum Chambers is the unlikely hero that has inspired a miraculous comeback for the Gunners against Aston Villa this afternoon, who’d have thought?

In the 81st minute of this afternoon’s Premier League clash between Arsenal and Aston Villa, substitute Calum Chambers battled with Villa’s defence in order to snatch a crucial goal for the Gunners.

The ace replaced wonderkid Bukayo Saka after Ainsley Maitland-Niles was sent off before halftime.

Pierre-Emerick Aubameyang and Alexandre Lacazette would be proud to score a goal like Chambers’, the versatile defender expertly controlled the ball before poking it into the back of the net.

Youngster Matteo Guendouzi started off the move with a pinpoint pass into the box, the ace should be given the chance to play in a more advanced role more often.

Check out the defender’s equaliser below:

The Gunners have managed to fight their way back into this game. Unai Emery is a very lucky man it seems.