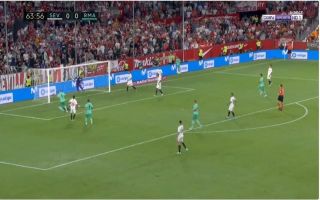 There just seems to be an inevitability about Zinedine Zidane losing his job at some point over the next few weeks. It’s almost like the board are waiting for one more bad result to justify giving him the boot.

He might be safe for at least a few more days after his team managed to win a difficult game away to Sevilla.

Karim Benzema is often underrated as you don’t think of him as a truly elite striker, but this goal puts him level on strikes with Lionel Messi this calendar year.

It’s a nice build up but his header is fantastic. He’s moving away from goal and needs to get it over the keeper, it’s just perfectly placed as it loops back across goal:

? Karim Benzema gets the breakthrough!

? A looping header from the French striker gives Real Madrid a 1-0 lead over Sevilla! pic.twitter.com/xGj7zxGtVj

It shows how demanding the job is when you consider Zidane has been under so much pressure, yet this result leaves Real joint top of the league and four points ahead of Barcelona.