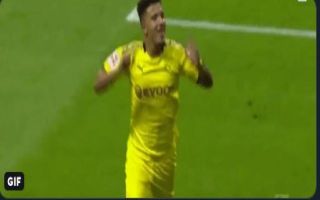 It’s starting to look like this could be Jadon Sancho’s last season in Germany. He’s been linked with a move back home ever since he started to impress for Borussia Dortmund.

He’s had a fantastic start to this season and established himself as the main attacking force for the Germans so far this season. Today’s goal leaves him with three goals and five assists after only six games.

It might not go down as one of his finest, but he catches the defence sleeping after the free kick breaks down and leaves the keeper no chance:

That’s now 3 goals and 5 assists in just 5 games in the Bundesliga this season.

A return to Man City or a big money move to try and rejuvenate seems like a possibility as he continues to excel, but the more he plays like this the higher that price tag is going to end up.

He seems like exactly the type of player Ole Gunnar Solskjaer is crying out for to provide some cutting edge and end product to a fairly impotent United front line.