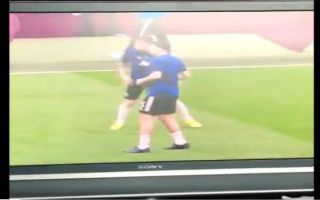 Punditry can often come down to throwing out as many opinions as possible in the hopes that some of them become accurate.

It’s rare to see an opinion validated almost immediately after coming out of the pundits mouth. Jose Mourinho showed impeccable timing here as he criticised one of his main signings at Man United:

‘Lindelof is not especially good in the air.’

Mourinho talks about the Swede’s weakness in the air moments before the camera showed the United defender making an absolute mess in the warm up.

It does big the question why did Mourinho sign him if he is so poor in the air?