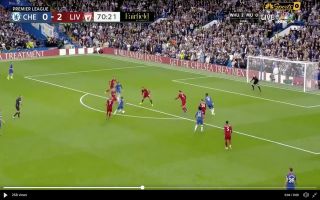 N’Golo Kante is doing his best to inspire a turnaround for Chelsea against Liverpool, the tireless midfielder just scored this beauty despite being surrounded by Reds.

Chelsea superstar N’Golo Kante pulled a goal back for the Blues in the 70th minute of their mammoth clash with Liverpool today, the ace took it upon himself and scored a stunner.

The tireless midfielder picked up the ball off club captain Cesar Azpilicueta and charged towards Liverpool’s goal, the 28–year-old tricked his way past Fabinho before firing a lovely shot into the top corner.

Kante somehow managed to do all of this despite being surrounded by Liverpool players Jordan Henderson, Fabinho, Virgil van Dijk and Joel Matip.

How did he manage to squeeze that shot through?

Check out the Frenchman’s solo goal below:

Oh my God what a goal by Ngolo Kante Chelsea vs Liverpool 1-2 #CHELIVpic.twitter.com/ZD0xuBwJfW

Kante really can do everything, classing the ace as a defensive midfielder is proving to be a massive understatement. Whose going to say he can’t attack after this stunner?

Liverpool star could be out for more than six weeks, might even be a doubt for Euros
More Stories Frank Lampard Jurgen Klopp N'Golo Kante