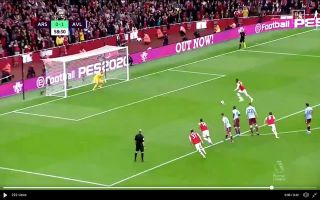 Nicolas Pepe has scored his first goal for Arsenal against Aston Villa this afternoon, the 24-year-old scored from the penalty spot in the 58th minute.

Arsenal were awarded a penalty after some lovely dribbling by Matteo Guendouzi, the ace was brought down in the box after a clumsy challenge from Aston Villa’s Bjorn Engels.

24-year-old Pepe looked ice-cold as he stepped up and slotted the ball into net to open his account for the Gunners.

Take a look at the Ivorian’s spot-kick below:

With the marquee signing now off the mark, Gooners will be hoping that the ace can start to show the devastating form he displayed in France.