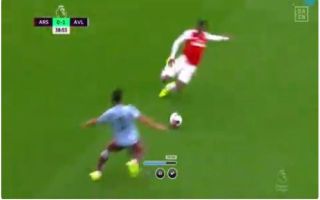 It’s really starting to feel like every time Arsenal do something positive it gets ruined by a stupid decision by one of the players.

There was renewed optimisim at The Emirates this week after a fantastic Europa League win and a breakthrough performance from youngster Bukayo Saka.

That’s already in danger of being squashed as Arsenal find themselves up against it versus Aston Villa. Already a goal down, Ainsley Maitland-Niles earned himself a second yellow thanks to this reckless foul:

Maitland-Niles genuinely got a second yellow for this beautiful challenge… pic.twitter.com/iR1TM7KEo3

It’s debatable if it’s a good tackle of if the way he goes into the challenge leaves the ref no choice but to dish out the second yellow. These fans on Twitter certainly felt the tackle was stupid:

Don’t care that tackle from Maitland Niles was as stupid as it gets!!! Bellerin could not be back soon enough #ARSAVL

It leaves Arsenal completely up against it in the second half against a decent Villa side. A loss here is the absolute last thing Unai Emery needs after a poor start to the season.