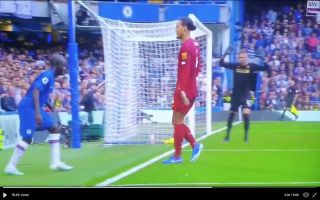 During the first-half of Liverpool vs Chelsea, Reds stalwart Virgil van Dijk couldn’t help but grin at Blues superstar N’Golo Kante after forcing the Frenchman out of play.

Kante attempted to use some trickery to get around the man mountain but it wasn’t enough.

The clip just reinforces the fact that Jurgen Klopp’s side are full of confidence right now, Van Dijk for one looks unstoppable when he’s contesting the opposition’s attackers.

Take a look at the Dutchman’s cheeky moment below:

Look at Van Dijk's smirk at the end at Kante. ? pic.twitter.com/ghvaCKyw1p

You could say that Kante got his own back on the Dutchman, the tireless midfielder scored a sensational goal for the Blues in the second-half of the clash.

Van Dijk can sleep comfortably though as it was ultimately his side that came out on top today.