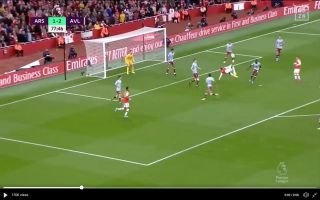 In the late stages of Arsenal’s clash with Aston Villa, superstar Nicolas Pepe tried his hand at an overhead kick which would have sent fans wild if it hit the back of the net.

The 24-year-old didn’t manage to connect with the ball cleanly but all was not lost as the ball spilled out to starlet Joe Willock, fans have described the ace’s effort as a ‘bicycle kick’ pass.

According to BBC Sport, the north London club paid a club-record fee of £72m to bring the exciting forward to the Emirates.

Today’s match proved to be quite action-packed for the Ivorian, the star grabbed his first goal for the Gunners by converting a penalty for Unai Emery’s side, check it out here.

Pepe also dazzled one of Aston Villa’s defenders with a sensational piece of skill.

Check out Pepe’s audacious attempt below:

Pépé with a bicycle pass. No look too. Yor winger could never pic.twitter.com/0lVcGqzEPr

Here’s how Gooners reacted to the Ivorian’s attempt:

Good pass if you ask me

The plus side of Pepe’s effort is that it shows that the ace is playing with confidence, this is massive for a player of the Ivorian’s style.

With the ace grabbing his first goal for the club today fans will be hoping that the former Lille star can take his game to the next level over the coming weeks.

Pepe has the ability to lead the Gunners to a top four finish this season.