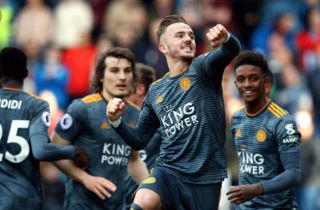 Arsenal fans have urged the club to sign Leicester City and Turkey star Caglar Soyuncu following the defender’s brilliant performance during the Foxes win over Spurs on Saturday.

Brendan Rodgers’ side gave their hopes of securing a top six finish come May a big boost yesterday, as they came from behind to win 2-1 against Tottenham at the King Power Stadium.

Goals from Pereira and Maddison helped the home side secure a remarkable comeback against their north London opponents, which was something they had to do after Kane opened the scoring in the first half.

However, it wasn’t the displays of Leicester’s goal scorers that caught the eye on Saturday, but that of centre-back Soyuncu.

The Turk put in a man of the match-worthy display against Pochettino’s men yesterday, doing all he could in order to try and keep Kane, Son and Co quiet.

Following his superb performance, Arsenal fans took to social media to call for their club to sign the 23-year-old, something they’ve had the chance to do before if this report from the Mirror is anything to go off.

Given the options the Gunners have to choose from at centre-back currently, it’s easy to see why they’d want Soyuncu moving to the Emirates in the immediate future…

@Arsenal We need Soyuncu of Leicester. He'll be a good pair with Rob Holding.

Caglar Soyuncu is needed at Arsenal.

Someone at arsenal buy this soyuncu guy

This January Arsenal need to throw players and money at Leicester.

I would honestly prefer us to go for Caglar Soyuncu over Dayot Upamecano. Soyuncu won't cost more than 45m to £50m Upamecano would cost as much as 70m. Spend 45m or £50m on Soyuncu and rest on bolstering the squad.#AFC