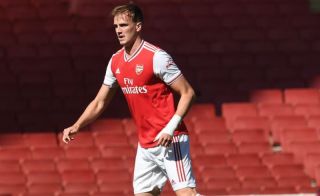 Arsenal have confirmed defender Rob Holding is set to make his first start since December, when the Gunners take on Nottingham Forest in the Carabao Cup on Tuesday night, according to The Metro.

The 24-year-old has been out of action since sustaining a knee injury against Manchester United last season, but has stepped up his recovery in recent weeks. He recently featured for Arsenal’s Under-23 as they defeated Leicester 2-1 on September 14.

Holding, who joined the North Londoners from Bolton for £2m in 2016, was included in his sides travelling squad for the Europa League clash against Eintracht Frankfurt last Thursday, but he failed to make the 18-man squad.

Unai Emery is keen for the defender to feature against Forest at the Emirates and it could be his second game in 48 hours for the Gunners. Holding could well be handed his first senior start in over nine months.

Dinos Mavropanos, Hector Bellerin and Kieran Tierney’s returns to fitness over the past couple of weeks have also handed the Arsenal boss a boost. All three were most recently involved in Arsenal’s Under-23s 2-2 draw against Wolves on Friday.

Arsenal’s defence still remains a concern, having conceded two sloppy goals against Aston Villa at the Emirates. Both the experienced David Luiz and Sokratis Papastathopolous have flattered to deceive, so Emery will hope to have all his options available very soon.