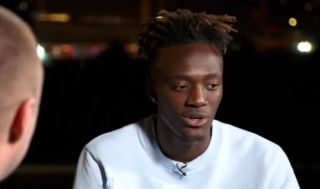 Chelsea striker Tammy Abraham has revealed he was made to stay behind at Carrow Road to do a drug test after his recent breakthrough performance against Norwich City.

The young forward scored twice that day to help Frank Lampard earn his first win as Chelsea manager, but ended up stuck in the stadium for some time afterwards due to not being able to provide the required amount of urine for a sample.

Watch this amusing anecdote from Abraham in the video clip above from around 1.40 as he explains the rest of the Chelsea squad left while he had to stay there until he satisfied the doping requirements.

Abraham has gone on to continue impressing in the Chelsea first-team after being given his opportunity by Lampard this season, and he paid tribute to the new Blues manager in his interview with Soccer AM.