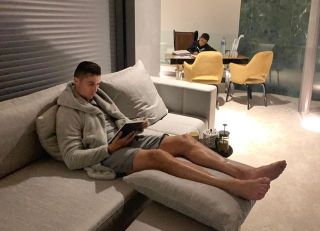 Cristiano Ronaldo opted not to attend the FIFA Best awards 2019 in Milan on Monday night, but he did share some thoughts after the top prize was announced.

That’s despite a successful year in which he won trophies with both Juventus and Portugal, and so there is an argument that he should have been closer to winning another accolade.

The fact that he didn’t attend the event was a big indication that he wasn’t taking it home, and so he later posted an image on Instagram with the caption below as he reacted to the likely disappointment he would have been feeling after not adding to his personal collection of awards.

“Patience and persistence are two characteristics that differentiate the professional from the amateur. Everything that is big today has started small. You can’t do everything, but do everything you can to make your dreams come true. And keep in mind that after night always comes dawn. LR.”

The 34-year-old was left out of the Juventus squad for their clash with Brescia on Tuesday after coach Maurizio Sarri confirmed to the media that he was struggling with a thigh problem.

In turn, he has been rested in midweek but he is seemingly remaining philosophical and positive despite coming in third best in the latest FIFA award voting results and it would come as no surprise if he used it as motivation and fuel to continue to perform at a higher level than most.

For now though, it’s Messi who makes it his sixth award, and so time will tell if Ronaldo can respond in the coming months to get that prize back next year.