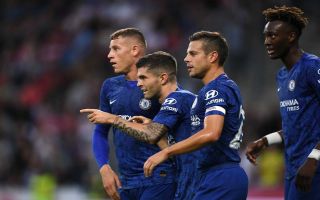 Chelsea manager Frank Lampard said that Christian Pulisic was benched for yesterday’s clash against Liverpool because he preferred Mason Mount and Willian.

The 21-year-old was an unused substitute at Stamford Bridge as the Blues suffered their second straight home defeat, this time at the hands of Liverpool thanks to goals from Trent Alexander-Arnold and Roberto Firmino. N’Golo Kante did provide a consolation goal in the 71st minute.

Lampard preferred to go with Willian at right-wing and Mason Mount on the left while he left Pulisic on the bench for the third successive game. The Chelsea manager defended his selection but said that the American international would receive more opportunities.

As quoted by NBC Sports, Lampard said: “I’ve got a squad to pick from. Before that he had played a few games. Willian has come back in and been sharp and looked good.

“I decided to go with Mason [Mount] today, because we needed to stay strong in midfield and play Mason high up the pitch. That is my choice to make.

“He (Pulisic) will get ample opportunities. He is a young player as well as everyone is talking about Mason and Tammy and Fikayo. He is actually as young, if not younger, than some of them. His chances will come.”

It will be hard to keep Mount out of the starting lineup given his current form and his performances as a left-winger have been fairly decent. Willian has also been pretty good on the right-wing so it will not be easy for Pulisic to find regular game time. However, there is surely a decent chance he’ll be in Chelsea’s starting lineup in their Carabao Cup fixture against Grimsby Town on Wednesday.