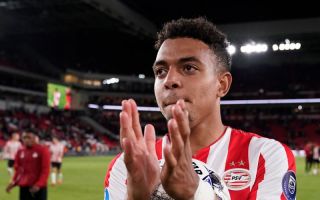 Arsenal’s recruitment team will have been left wincing once again, after youngster Donyell Malen netted in PSV Eindhoven’s 1-1 against Champions League semi-finalists Ajax on Sunday.

Malen, 20, who netted a staggering five goals in PSV’s 5-0 victory over Vitesse last week, fired a right-footed shot past Ajax shot-stopper André Onana on 77 minutes to earn his team a point at the Philips Stadion.

The youngster, who has bagged a staggering 12 goals in 15 appearances so far this season, made his international debut a couple of weeks ago as the Netherlands beat Germany 4-2 in Hamburg – and, naturally, found the net. He also opened the scoring as PSV defeated Sporting Lisbon 3-2 in the Europa League last week.

It looks as though Arsenal made a huge blunder, by letting the talented forward leave two years ago for a teeny fee of just £500,000, according to The Mirror, who now claim that his value has rocketed to £50m.

The same source report that the Gunners are monitoring Malen with a view to possibly re-signing him, despite his price-tag now being 100 times what it was when he left north London.

Malen seemed to have a strong relationship with former Gunners manager Arsène Wenger, who took the forward on the pre-season tour of China and Australia in 2017, yet he was still sold that summer.

The Gunners have previously made the same mistake before, with The Mirror claiming Serge Gnabry was sold for as cheap as £5m. The 24-year-old is now one of the hottest prospects in Europe, and is impressing for both Bayern Munich and Germany.

Arsenal may have competition if they do pursue Malen, with Liverpool also watching the wonderkid, per The Metro. Liverpool already have a strong Dutch contingent – with Virgil van Dijk, Georginio Wijnaldum and 17-year-old centre-back Seppe van Den Berg among their ranks.

It looks as though letting Malen leave for peanuts was one of the final errors made by Wenger and Arsenal fans will be hoping a similar situation doesn’t happen again.