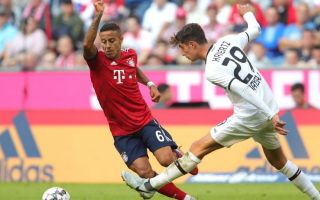 Manchester United and other clubs have reportedly been told it will cost them £90million to clinch the transfer of exciting Bayer Leverkusen midfielder Kai Havertz.

The 20-year-old looks one of the brightest prospects in Europe at the moment, and has shown himself to be a brilliant all-rounder who could surely add plenty to this struggling Man Utd squad.

According to the Daily Express, the Red Devils are among the top teams interested, alongside rivals Liverpool, with Leverkusen willing to let Havertz go for around £90m.

Considering the state of the transfer market at the moment, that doesn’t seem too bad and is surely a fee United could afford to pay to significantly strengthen in what has been a problem position for them.

Kai Havertz would be an exciting signing for Manchester United

MUFC failed to bring in a replacement for Ander Herrera this summer, while the likes of Paul Pogba and Fred continue to struggle in Ole Gunnar Solskjaer’s side.

A bright young talent like Havertz could be just what United need, and if it’s true he can leave for £90m, Ed Woodward and co. surely need to come up with that money fast and see off what will surely be plenty of competition for his signature.