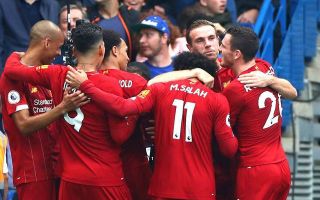 The Reds registered their 15th consecutive Premier League win by beating the Blues 2-1 at Stamford Bridge. Trent Alexander-Arnold opened the scoring before Firmino headed in Liverpool’s second from an Andy Robertson cross. Chelsea did find a goal back thanks to N’Golo Kante in the 71st minute. However, they failed to find an equaliser and eventually suffered their second straight home defeat.

Following the match, Lampard said that the Blues were the better team in the second half and also added that not marking Firmino resulted in Liverpool’s second goal which in turn, led to Chelsea’s defeat. As quoted by the Liverpool Echo, the Blues manager said when asked if his team were the better one:  “On performance, yes. Particularly the second half. With that, you have to say details lose you games. (Roberto) Firmino lost us the game because we didn’t mark him (for the second goal).

“But the way we played in the second half was the way that we want to be, and we did it against Liverpool. At half-time 2-0 down you can take it on the chin that this team is too good and we can’t turn it around, but we did the opposite. But we need points. We have to aspire to be like Liverpool. They come here and don’t play their best and still win the game.

“Liverpool are a strong team and you can lose. The difference between us and Liverpool is that we aren’t consistently as good as them or Manchester City week in week out. To work towards those levels is hard. It’s a daily thing.”

The goal from Firmino did turn out to be the deciding factor but Chelsea should take heart in their performance. They gave their all in the second half and in the end, fell just short.

The Blues are currently 11th in the Premier League table with eight points. Chelsea next face Grimsby Town in the Carabao Cup on Wednesday before playing Brighton and Hove Albion on Saturday.