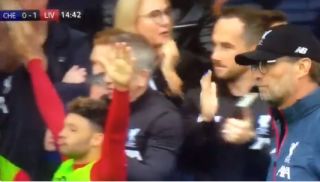 A video has emerged online showing a Liverpool fan forgetting not to tone down her celebrations as she sat among Chelsea supporters in yesterday’s big game at Stamford Bridge.

Watch below as this Reds fan celebrates Trent Alexander-Arnold’s opening goal before quickly realising she should probably keep quiet with a hilarious worried expression on her face.

Liverpool went on to win 2-1 against the Blues, so it will have been a very happy day for her, even if she couldn’t necessarily show it too much.

Alexander-Arnold’s free-kick was followed by a header from Roberto Firmino before N’Golo Kante pulled one back for Chelsea in the second half.