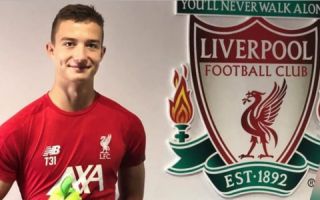 Mrozek, 15, appears to have been pictured outside Anfield and Liverpool officials are said to be heading to Poland next week to complete a deal to bring the youngster to Merseyside.

FIFA’s rules don’t allow clubs to sign players under the age of 16, and so the Reds will have to come to an agreement with SMS Junior Wroclaw. Sportowe Fakty claim that Mrozek has already passed a medical and the club are ‘delighted’ to get him onboard.

???? Liverpool to sign Polish goalkeeper Fabian Mrozek from FC Wroclaw Academy when he turns 16 next year.

He trained alongside the first team at Melwood in August. pic.twitter.com/fSRTlyY0Ni

Liverpool already have two Polish shot-stoppers in their ranks in Kamil Grabara and Jakub Ojrzynski, and should Mrozek join, he will become the third. Sportowe Fakty also state he is expected to remain with Wroclaw until he turns 16-years-old.

Read More: Lampard says Chelsea lost the match because of one Liverpool player

Wroclaw U18s’ goalkeeping coach, Milosz Gladoch, has confirmed that Mrozek had a successful trial with Liverpool and club officials are flying in to meet with the teenager’s family next week, the news outlet also cite.

It looks as though the future is bright in the Reds’ goalkeeping department for years to come, and Jürgen Klopp looks to have persuaded the youngster to move to Anfield.