Garth Crooks has selected his Premier League team of the week, with some big names from Liverpool and Arsenal in, but only two Manchester City players.

If there’s one thing you can’t accuse Crooks of it’s big club bias, with the pundit clearly not over-awed by City’s 8-0 demolition of Watford as he selected only Kevin De Bruyne and Bernardo Silva in his line up.

MORE: Trent Alexander-Arnold celebration against Chelsea was so FIFA 20 and many Liverpool fans loved it

And alongside those City stars, plus Roberto Firmino and Adrian for Liverpool, and Arsenal striker Pierre-Emerick Aubameyang, there are plenty of names from the so-called lesser sides such as West Ham, Bournemouth, Sheffield United, Leicester City and Newcastle.

Here’s Crooks’ XI in full, with man-of-the-moment James Maddison making it in after another big performance in this weekend’s 2-1 win over Tottenham: 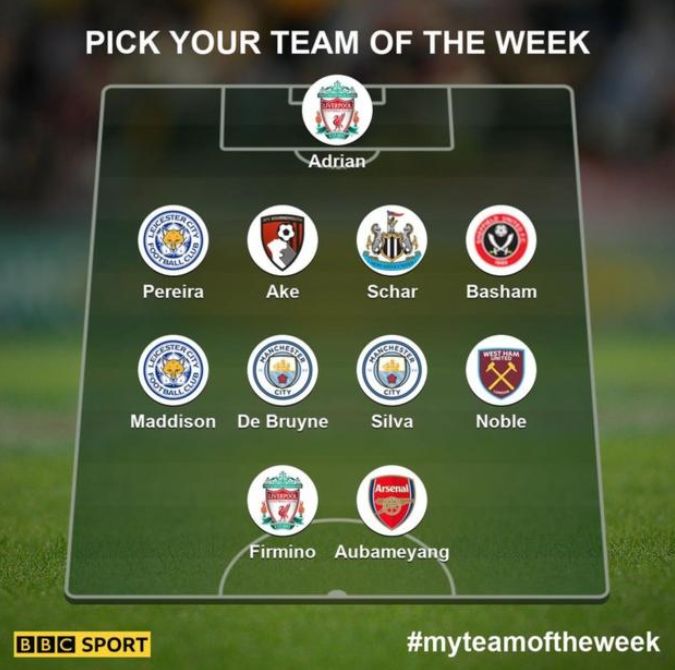 To be fair, even if City could surely get one or two more names in there after scoring – we repeat – EIGHT goals, it’s mostly hard to argue with this selection.

Liverpool, after all, overcame a bigger test with an impressive away win at Chelsea, while Aubameyang continues to show himself to be one of the very finest players in this league with a superb winning goal for Arsenal against Aston Villa.

Noble, meanwhile, is a real unsung hero at West Ham and more than played his part in the club’s 2-0 win over Manchester United.