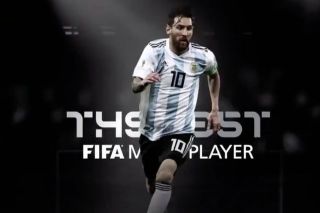 Barcelona and Argentina superstar Lionel Messi has been named Best FIFA Men’s Player at the 2019 awards ceremony in Milan on Monday night.

The 32-year-old is coming off the back of a sensational season with 51 goals and 22 assists in 50 games while winning a domestic double with Barcelona.

SEE MORE: “Is someone at Fifa taking the p*ss?”: These fans can’t believe Pep Guardiola lost out to Klopp for Coach of the Year award

He was also the Champions League top goalscorer and top scorer for the Catalan giants, while this award now makes it a record sixth time he has won it.

In turn, with those figures and achievements mentioned above, there is a strong argument in favour of Messi taking the award home. However, others certainly disagreed as seen in the tweets below, as they felt as though the other contenders were more deserving of the accolade.

It comes after another successful year for Cristiano Ronaldo with both Juventus and Portugal, while Virgil van Dijk led Liverpool to the Champions League last season.

With that in mind, it’s only natural that all three final contenders have a strong case for winning the award, but ultimately it’s Messi who has been announced as the winner this year.

There was perhaps a major hint dropped by Ronaldo prior to the ceremony given that he didn’t attend it, and so it seemingly came down to Messi and Van Dijk.

Both players will undoubtedly be delighted with the year that they’ve both had, but it’s a sixth award for Messi as he continues to find a way to deliver and lead Barcelona’s charge for more major honours.

VVD robbed for this fraudster

@FIFAcom Fix. Messi couldn’t get @FCBarcelona past @VirgilvDijk and @LFC turns out you get awards just for playing for Madrid and Barca and winning nothing.