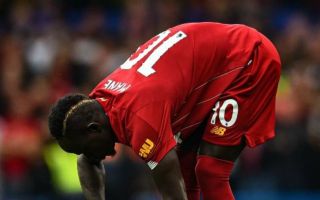 Liverpool continued their perfect start to the 2019-20 Premier League season on Sunday but their 2-1 win over Chelsea may have come at a cost.

Star man Sadio Mane was subbed off on 71 minutes after moving uncomfortably at Stamford Bridge.

Mane’s withdrawal was the result of two issues, according to Reds manager Jurgen Klopp.

Klopp sounded concerned on Sunday night when he was quoted by LiverpoolFC.com as saying: “It was a knock on the bone, around the knee, and a dead leg – that’s an awful combination.

“He tried everything but I think you saw, there was one counter situation when he really tried and I would say on a non-dead-leg day he will get that ball, but no chance and then we say ‘come on, now we have to do it’ and changed. That’s it.”

Mane – who shared the Golden Boot with Mo Salah and Pierre-Emerick Aubameyang last season – has been in fine form so far this term, providing four goals and an assist in six Premier League outings.

The Senegal international was not directly involved in either of Liverpool’s goals at Chelsea but he was a frequent threat and touched the ball 44 times – more than Roberto Firmino, who played the full match.

Firmino scored Liverpool’s second goal of the game on Sunday, adding to Trent Alexander-Arnold’s opener before N’Golo Kante set up a grandstand finish.

Klopp will be hoping to have Mane fit to face Sheffield United next weekend. Liverpool’s other major attacker of note is Divock Origi, who missed the Chelsea trip with an ankle issue.

Chelsea’s slim title dreams appear to have died on Sunday. They are now 10 points behind leaders Liverpool.

Frank Lampard’s men sit 11th in the table after six rounds of fixtures.