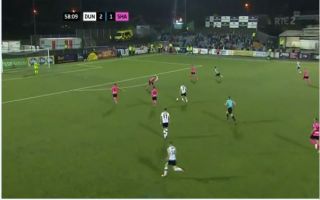 Celtic went through a phase of bringing players over from Ireland who you knew would never get a fair crack in the first team. Niall McGinn and even Paddy McCourt never became first team regulars.

Another similar type signing was Michael Duffy. He didn’t play in any first team games and eventually moved to Dundalk after spells with Dundee and Alloa.

He showed what he could do tonight as he scored an absolute rocket to help Dundalk seal the league title:

Cannot stop watching this. What a peach from Duffy. Jack who? pic.twitter.com/S3gDzi28PY

He’s now 25 so it would be the ideal time to move on to a bigger club if he has ambitions to move away from Ireland again. Dundalk do have a decent history in the Europa League so he might decide it’s best to stay put.

One thing for sure is this is a glorious way to win the league for your team.